A BIG Interview with Paper Runway

We are so excited to share with you the absolutely enchanting and covetable world of gorgeous finds and divine paper design: Paper Runway. We have been emersed in reading the passion and paper featured in the inspiring  launch edition.  Paper Runway is the brainchild of Nikki Buckland and 'our' own amazing Maree Oaten. Maree has designed the BIG logo to be revealed in the next few days and we are in great admiration of the awesome magazine she has made! You can subscribe to the print magazine here and enjoy the FREE online version here. We were so happy to catch the girls on the eve of their launch and began with their response to the B.I.G question:

Bravery is?
Stepping outside the feigned square when everyone is watching and saying it’s okay.
Imagination is?
Remembering to be 5 again.
Generosity is?
Doing something for others without the expectation of anything in return. 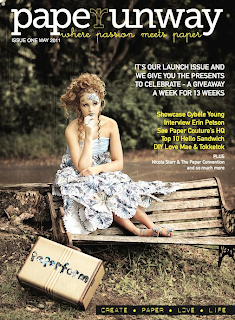 How are you feeling the day before the launch of your first issue?
Emotional, so excited, wishing and hoping that it is received with the love and passion that it was created, nervous, relieved, anxious but so proud of what we have created.

Tell us a little bit about your background and what it was that led you to Paper Runway? We first came together when Maree contacted Nikki seeking to stock Little Branch in Nikki’s online store Paper Scissors Rock Stationery. We chatted daily about little ventures that we were both involved in shared ideas and thoughts and supported each other’s momentary meltdowns. We shared virtual cups of coffee, glasses of wine and long nights as Maree was based in Sydney at the beginning and Nikki near Byron Bay and so began the idea of Paper Runway.
There are many beautiful inspirational magazines on the market at the moment but none (that we could find) that embraced the humble medium of Paper.  There was a gap in the market that we saw and we believe Paper Runway has filled that gap.

Nikki has worked in family law for over 15 years, while always having an artistic and entrepreneurial desire.  She started a company, I Dream of Cupcakes in 2008 creating cupcakes after seeing a gap in the Bryon Bay market.  Whilst the company still creates delicious cupcakes Nikki takes a backseat role these days. Nikki’s balances life with husband Todd, 3 kids Maison (featured on the cover of Paper Runway), Riley and Isla, between working in family law, running online paper and stationery store Paper Scissors Rock Stationery and Paper Runway.
Maree has worked as a graphic designer for over 12 years and whose career has allowed her to travel and work in London for 6 year of those, before returning to sydney with her husband and their 3 souvenirs (children). After returning to Australia Maree started little branch, an Australian made artisan stationery line with writer and illustrator, Anna Johnson. Maree tries to balance running after 3 kids, little branch, paper runway and a little freelance design.


How would you describe the distance between the first gem of the 'Paper Runway' idea and the day you were ready to publish the first issue? The journey between the “light bulb” idea to publishing Paper Runway has been far and long.  From creating the paper dress for the cover shoot to chatting to many many paper artists and talented people, feature interviews, searching for hot products, bringing it altogether and first realising we could actually print our magazine has been nothing short of a roll-a-coaster ride.  After all the paper products had been gathered, features confirmed and interviews returned, Maree’s email to Nikki with a first proof which was entitled “I think you are going to wet your pants”!


What has been the most energising part of the PaperRunway journey so far? And the most exhausting?!  The most energising part of Paper Runway is discovering the amazing and abundant talent who work with paper in one way or another. We have loved working alongside each other.  Quite often we would email each other almost simultaneously with the same idea or possible feature artists.  We are certainly on the same page which is a really nice way to share in something we are both passionate about and turn it into a business.  Dream job really.
It has (certainly) been exhausting.  As we both run other businesses, time has been our enemy.  We have worked on the magazine mostly at night which has been tough, sleep deprivation is not our friend.

Do you have a specific daily work structure or does it depend on the will of the wind?! Oh most definitely the “will of the wind” or “the will of small children” perhaps is more suited.  Daily work structure has been literally grabbing whatever time we can between our other businesses, husbands, children and life in general and then working at night.  Luckily we are both night owls –if we weren’t before we are now!
What was your favourite childhood activity?
Nikki recalls her favourite activity being at her grandmother’s home in Newcastle where they would play with wooden stamps and create cards and notes for the family.  Nikki’s grandmother is an avid creator to this day at 81.  She makes her own cards and dabbles in all sorts of paper creations, it too is her passion.  Nikki still have the original stamps that were her great grandparents that her father and his siblings played with.  The children, mainly Isla at aged 5, still play with them some 65 years later.


Maree's favourite childhood activity was to draw and paint. Her mum used to make paint with starch and she can still remember the smell of it. Using pieces of lovely paper in collage and clag paste... A bit of a collector Maree has many boxes of paper samples from over the years dating back to birthday cards from when she was 2. A little bit bower bird perhaps, yet feathered creatures make her squeal and shudder!

We wish Paper Runway a most brilliant first flight!